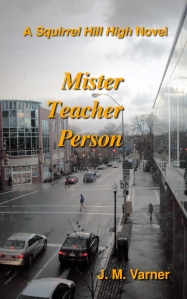 Stacy King, star reporter for television news station KPGH, has made it.  Successful in high school.  Successful in college.  Her face is now seen by tens of thousands every day throughout Squirrel Hill and the entire Pittsburgh area.

But her latest assignment, returning to Squirrel Hill High for a profile piece on English teacher Mr. Payne (who has himself recently disappeared from the halls of the high school) puts her back in touch with a past she thought she’d left behind.

And on her journey to discover what happened to Mr. Payne, startling revelations about her own past at Squirrel Hill High are brought to light.

…Reporter Stacy King walks straight into a mystery that no one else seems willing to solve and is transported back to her own high-school years.  This novel has a story line that will keep YA readers entranced, as well as a message about cyberbullying that will lend itself to class discussion without being preachy….
— Barb via Goodreads

…I also really liked the Stacy King story. She is a young reporter who goes back to her high school for a job as a reporter. I connected with her because I recently went back to my own high school for a work opportunity. I felt the same wave of nostalgia going back, so it was really nice to finally see a character who I could really understand. Yes, she had good memories at Squirrel Hill High, but she also had some bad ones, and going back helps her overcome the bad memories and she is able to rediscover herself….
— Erin via The Hardcover Lover / Goodreads

Megan doesn’t want to lose her best friend Sara, her closest companion at Squirrel Hill High, but Sara’s new popularity on the social network Digital Me threatens to tear them apart.

Sara wants to Connect with Squirrel Hill High’s most popular guy, Josh, on Digital Me, but in the digital world, not everything’s as it seems.

Jaron wants to hack into Digital Me to prove his worth to the global hacker community, but living in Russia leaves him blocked behind a digital iron curtain.

Digital Me — Where these three lives collide in a way that’s only possible in the brave new digital world.

Praise for “Digital Me”:

…My favorite character was Leo, mainly because he is a rather honest and “gentlemanly” compared to the other boys in our society and in the story. The fact that he goes to great lengths for Megan even though he probably knows he won’t get any thing in return. Plus, he is a geek, and geeks are normally pretty smart.  Megan is my second favorite character because of the clarity of her surrondings and how much she cares about her friend. Even though it was hard for her to ask for help, she managed to ask Leo for help, making a good combination and team. I would definatly not mind seeing Leo’s and Megan’s relationship become more indepth….
— A teen reader via email

…I enjoyed this book and thought the twists in the storyline were great. i would say that the story is definitely for younger readers but i think most can sail through the book easily. At times i wanted to shout at the characters to speak to each other or don’t do this or that but that’s a good sign to show that the story is keeping your attention, but above all i liked that the story can teach us all a really good lesson regarding social networks….
— Sarah M. via Amazon.co.uk

…All kids these days have been warned about the importance of discretion on the internet. Most, however, have not witnessed or experienced any situations personally that would prove why being careful is so important. This book gives one such example. And it does so in such an initially innocent way that the same situation could have happened to anyone, making it hit even closer to home….
— Megan G. via Amazon.com

This book really hit home with my up rising fears of how cell phone and social networking effects all of us and how it can damage youth in such a way. Congratulations J.M. Varner you have a fan you have made for many life discussions with my fiance and our future children, you made me feel the electronic immersion and fears for the realities it holds.
— Angela via Goodreads

What do you think? Cancel reply